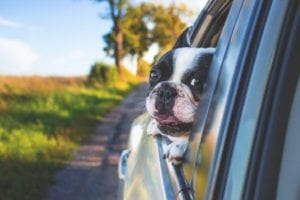 Millions of Americans recognize that dogs are wonderful companions and often bring their favorite furry friend along on road trips, day trips, and day-to-day errands. However, in a vehicle, this can mean added distractions for the driver and added dangers for all passengers, including pets.

Drivers Distracted by Dogs, Many Don’t Realize It
According to a survey sponsored by AAA, 29 percent of respondents admit to being distracted by their dog while driving; however, 65 percent have participated in at least one distracting behavior while driving with their dog:

Unrestrained Dogs Dangerous to Driver, Passenger and Man’s Best Friend
An overwhelming 84 percent of survey respondents stated that they have driven with their pets on a variety of car trips. However, only 16 percent use any form of pet restraint system when driving with their dog.

The use of a pet restraint system can aid in limiting distractions and help protect your pet:

AAA recommends that pet owners restrain their pet inside the vehicle not only to avoid distraction but to protect the animal and other passengers in a crash. So, each and every time you travel with your dog, just as you put on your seat belt when you hit the road, be sure you do the same for your canine companion.

How To Take Care Of Your Car Like An Adult

1. Clean the inside and outside of your car every month. Seriously. Why It’s Important: Keeping your car clean is like keeping your room clean, except everyone can see your car and gauge how dirty (or clean) you are. The Cost Of Not Doing It: An unclean car will eventually attract dirt and grime that can damage your […]

Should You Wash Your Car During Winter?

There’s more salt on your car than on a Snyder pretzel. More sand than on Daytona Beach. But when should you wash your car in the winter? The American Automobile Association (AAA) encourages car owners to regularly wash their vehicles because of the severe damage road salt and ice melter chemicals can have on your car. […]